From farm to agritech

John Ferguson is, I’m sure he won’t mind me saying, not your usual entrepreneur. He didn’t have a burning aspiration to be a mogul aged 15, nor did he envision himself as a CEO. Rather, as an agricultural student in his early 20s, he assumed he would end up managing a Scottish farm.

His journey as an agriculturalist has, however, led him to developing one of the world’s most sustainable insulation products for domestic and industrial usage, and it was a journey that began in Africa.

As part of his MSc in Tropical Agricultural Development, John travelled to Tanzania where, amongst other things, he was training farmers to help cope with climate change. 5,000 miles away from home, he learned a lot.

For example: sisal is a highly sustainable crop, it is particularly drought resistant, and is an excellent cash crop for farmers to opt for in areas that are particularly susceptible to climate change.

The global market for sisal disappeared in the 1960s with the advent of polypropylene (ropes and sacks a prime example). The market has recently started to show signs of growth again, but small-scale farmers still do not have any way of accessing international markets. John thought that if he could generate a market for the sisal, he would be supporting farmers that would otherwise struggle to cultivate crops that are more sensitive to an increasingly capricious environment.

John found himself with a raw product and a determination to build an ethical business with a positive environmental and social impact… but no final product to market.

He came back to Scotland and undertook a rigorous product and materials testing process, where he realised the remarkable strength and insulating properties of sisal. He also learned of the huge carbon footprint of the construction industry and the push from those involved in the built environment to find low carbon products.

Scotland has a goal to be carbon neutral within 25 years and to reach this a sizable portion of current housing stock needs to be retrofitted with better insulation. Old housing, such as tenements, are notoriously difficult to heat, contributing to carbon emissions and also to fuel poverty, and there are various efforts underway to improve this.

With a market keen for innovative, low carbon products, John focused on insulation with his sisal material. On its own, the sisal provides superb temperature moderating capacities, with great insulating properties without the classic ‘sweatbox’ effect of plastic insulation. But it’s also very tough to cut, too tough to make insulation blocks. So John sought to find an additional, sustainable material to mix with the sisal to help with its functionality.

With help from Zero Waste Scotland, John discovered a readily available supply of off-cuts from the tweed trade, and when blended with the sisal, the result is a highly insulating brick that can be manufactured at scale, using sustainable and circular economy materials, with as close to a net zero footprint as its possible to get.

John is now in the process of scaling up production and has had great feedback from early adopters of his insulation. His path to entrepreneurship may not be a conventional one, but then again, maybe that’s exactly what is needed to generate successful, sustainable, and ethical businesses fit for the 21st century and beyond.

The sisal is grown in Tanzania, where it is also brushed and baled. The sisal bales are then shipped to the UK. When baled, the shipping container is absolutely packed to the rafters, meaning no dead space and maximising the ‘bang for your buck’ carbon footprint-wise. Sisaltech avoid road transport wherever possible because of the high carbon footprint. If they were growing an equivalent product in the UK, John estimates the carbon footprint would be much higher just because of road transport costs across the country.

2. Look to your supply chain

John works closely with the farming community in Tanzania to ensure fair prices and an ethical supply chain. He’s cultivated not only hardy crops but also hardy relationships. He’s also gone to some lengths to source sustainable alternatives to plastic binders for the insulation product, meaning Sisaltech’s final product contains no plastic materials at all.

3. Ethical business must be about people and planet

Sisaltech’s business model means the team are constantly pushing for the lowest carbon footprint option for whatever it is they are doing. Their model also means they look after the farmers that grow the sisal. John keeps in contact with the farmers throughout the year and knows that, even in the toughest conditions, his farmers are still guaranteed an income as the sisal won’t succumb to the drought conditions.

4. Build your team with skills that complement yours

John knows what he’s good at – and what he’s not so good at. He’s made a point of bringing people on board who have the skills that he either doesn’t have and that allow him to grow the business. This enables his team to focus on their key skills, maximising their effectiveness but also their job enjoyment too.

5. Get to a minimum viable product and grow from there

John managed to get to a minimum viable product that he could showcase and demonstrate the potential of the sisal material the company was developing. The MVP has been the springboard for growing the business and enabling construction companies to see the great use value of Sisaltech.

Listen to the Podcast 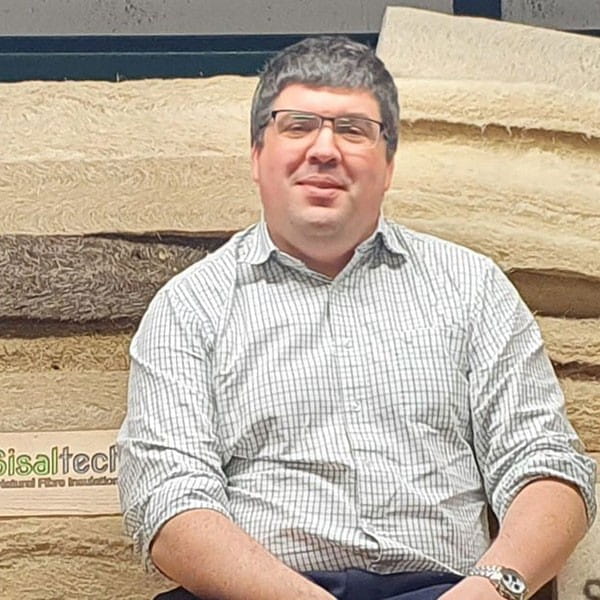 "Having an environmental and social impact is as important as making profit." John found himself with a raw product and a determination to build an ethical business with a positive environmental and social impact. With a market keen for innovative, low carbon products, John focused on insulation with his sisal material. Find out more about Sisaltech has been able to generate a successful, sustainable, and ethical businesses fit for the 21st century and beyond.